A second playtest was held last weekend. I will be doing some more playtesting over the Xmas break down in Christchurch, and will then try and squeeze in another session in Wellington in early January. The main improvement from the playtest is a much better handling of the NPC Pirate and Warlord forces, dropping technology cards, and speeding up play by making some of the player actions automatic each turn, reducing the number of choices you make. The revised player mat is below. 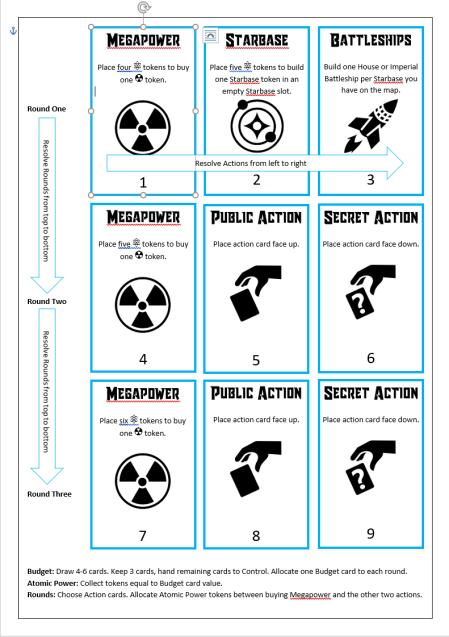 Game tokens have been ordered from Europe and the USA, and I am about to confirm an order for some laser cut tokens from battle Kiwi here in New Zealand. The five Jenga style block towers for use in the trading mini-game have all arrived from Auckland, and the star themed NASA playing cards are on their way from Book Depository. Apart from the laser cut tokens, I am expecting delivery of the rest of the game components before Christmas.

I have updated the main webpage for the game, with information on the factions in the game, and a copy of the draft rules. In a change from my past Megagames, The Galaxy Will Burn will not be balanced around factions with even numbers of players or player roles. If a faction is really popular during casting, then it will have more players. During play of the game, it is expected that player diplomacy will even out the effects of team size.

While we did not playtest the political game last weekend, we did walk through the mechanics and based on the feedback I cut down the number of government agencies to three branches of government and five offices of government. The Megapower economy was also simplified. The main use for Megapower tokens is in the political game, i.e. Quadrant map players decide how many they want to buy, give the Megapower tokens to their faction leader, and the faction leader then uses these tokens to acquire privilege cards for their team members.

The three branches of government are:

The offices of government the main source of one use Privilege cards for players. The five offices are:

There is also an unofficial agency, the Deep State. This is all of the various secret services, palace guards, private militias, paramilitary police, and naval forces based around the imperial capital. While no one can ever “control” the Deep State, it is the source of privilege cards with a skulduggery focus (e.g. assassins, spies, coup attempts, selling weapons to pirates). The politician play mat is below.

This entry was posted on Saturday, December 9th, 2017 at 8:58 am and is filed under Megagame. You can follow any responses to this entry through the RSS 2.0 feed. You can leave a response, or trackback from your own site.