Last Saturday at Wellycon X, I ran the Aquila Rift Megagame, with the assistance of five control players and the enthusiasm of 26 players. A lot of the game files are available online, if you are interested in taking a look. Aquila Rift was intended to be more of a casual Megagame, and none of the players had played one before, and only a few had heard of them before Wellycon – although one player had watched the Shut Up & Sit Down Watch the Skies video several times. 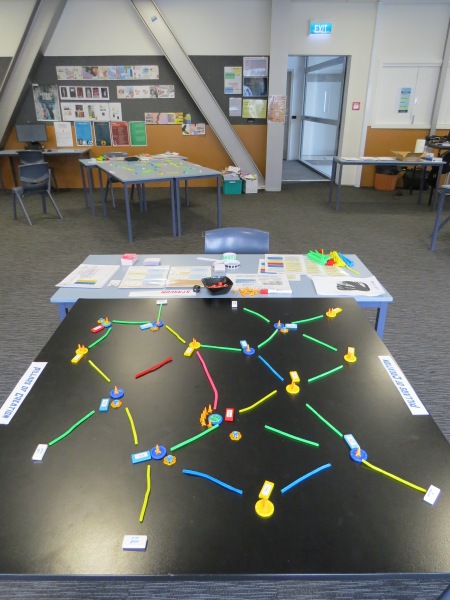 Each map table had roughly 14 systems that players could move between. Blue routes were pirate only, red routes inflicted damage. White markers indicate routes onto other map tables. The Control table has everything needed to run the map game, and one of the committees.

Setup started around 1100 and took a bit over two hours with one other person helping. Travis was also heaven sent when another member of the Control team texted to tell me he had rolled his ankle that morning while tramping. Travis volunteered to drive out and do a pick up so we would not be shorthanded. 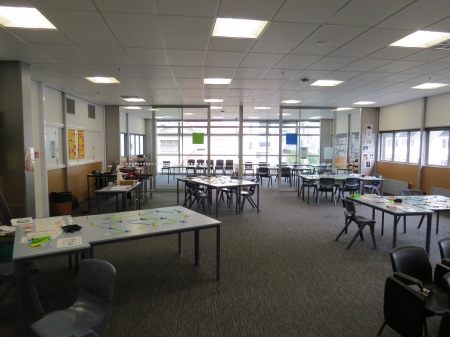 We set up six tables, but only used five.

We had around 19 signups before Wellycon started, so we picked up several people on the day, and also had four last minute cancellations – they felt that they could not commit to a four hour game.

A live action game of Codenames ran over time, so we started late (~4.30pm) and played through to 8.30pm. All up we got through 18 map turns and six committee phases. I was pretty happy with how the interaction between the map game and the committee game worked. There were problems, but in general I think the concept works for the kind of low player number Megagame I can run in Wellington. Every player gets to wear at least two hats. If I could get 60+ players I would focus more on one role per player. 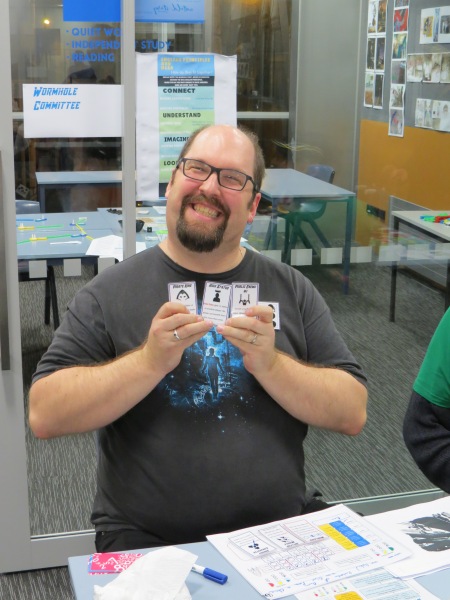 One new thing I did this time was to get some video. We did not have a spare person to run the camera, so I just left it in place with a Tripod. I will be teaching myself how to edit video this weekend and then I will try and put the highlights of game play and end of game speeches up on YouTube. 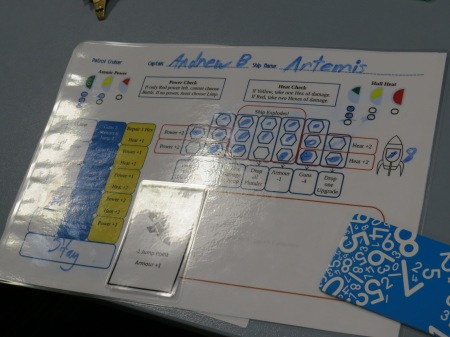 This ship was almost destroyed in battle, just two more hexes of damage would have finished it off.

While law and order was maintained in some sectors, in others it collapsed, and pirates were able to “put the sector on farm”. The Viceroy gave good speeches, but teams were more united in the search for lost relics than in cooperating for the development of the sector. Some player feedback though t there were too many pirates. There were twice as many pirates as other roles, but only about one more Pirate than there were Patrol and Governor players.

The top five end of game plunder scores in the bank were:

On the whole I was happy with how the game system worked. Combat was the complicated bit, but it seems to have worked out okay – but one person did give feedback that it was too complicated. Where I was surprised, was just how much plunder appeared in the game – it was quite a bit more than in the playtests. This distorted the committee a bit, so if I run Aquila Rift again I would look at the plunder economy first, rejigging the committees second, and making combat simpler as the third priority. The search for the lost ships also seems to have been a good unifying element for teamwork in the game. 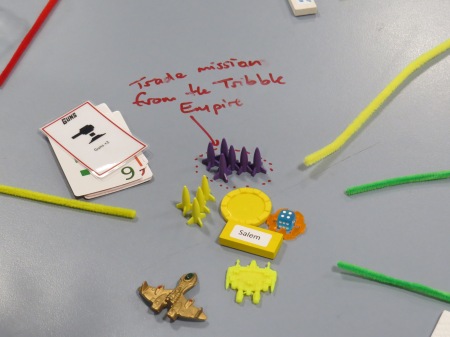 Players were inventive with the dry erase markers.

Number Crunching from the Feedback Forms

I got 20 responses to the feedback survey form. Not to future self, have a few biro pens lying around for this – dry erase pens are not good for writing feedback. People were asked to rate things from 1-5, and high numbers were usually good.

I am very happy with the 4.55 rating for enjoyment! In terms of support for future games, 85% said they would like to play a Megagame again, and were willing to pay an the average of $27.65 for a whole day game and $18.50 for an evening game. Fourteen people also said they would like to help Control in the future. I think about 75% of the player and control team had read at least part of the game rules before the game. 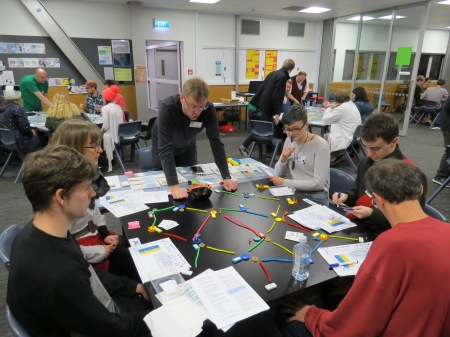 In the middle of a map turn.

I intend to recycle a lot of the game structure from Aquila Rift in The Galaxy Will Burn. Some players gave feedback on Aquila Rift that they wanted more politics, intrigue and an expanded faction game. TGWB will definitely have that.

My thanks go out to Wellycon for giving us the space to play in, to my control team of Alan, Dutton, Travis, John and Alistair, and to all of the players for an enjoyable game.

This entry was posted on Wednesday, June 7th, 2017 at 10:43 pm and is filed under Megagame. You can follow any responses to this entry through the RSS 2.0 feed. You can leave a response, or trackback from your own site.