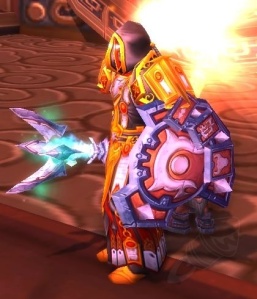 Back when the Garrosh Bind-on-Account (BOA) weapons and shields were first announced I was pretty excited, especially when I looked at the design of the shields. As a fan of the Horde, I really wanted either of the two Shield BOAs for transmogrification.  In over a year of grinding to Garrosh, in two modes of content, the only BOAs I have had are the one-handed strength sword (twice). It has been a frustrating experience.

Once Warlords of Draenor goes live, the BOAs go away forever. So I have been sitting down and figuring out what my odds are of getting that shield, and how much effort it is worth me putting into it.

For the last four weeks of the expansion, the drop rate has been changed to 100% for the first kill on each difficulty level, but only if you do not already have a BOA for that difficulty. The first BOA drop is for your designated loot specialisation. Subsequent drops (if any) are random (1 of 11 drops or a 9% chance of getting what you want if you want one item above all others). Repeat drops of the same item are possible, so there are diminishing returns after the first few BOAs.

Frustratingly, we no longer have the option of just running the fourth wing of Siege of Orgrimmar at the old flex difficulty level. So that means what could be a one hour run, is going to be three hour run. People are going to be really, really sick of SOO by the end of this (so finish the achievements now, no one is going to want to go back at 100). On the plus side, we can take everyone in guild who wants to go, in one team, rather than having to leave someone on a bench somewhere.

A second frustration, is that my best raid geared character, the one I could confidently pug anything with, is the character least likely to get a BOA drop (because it has already had a drop on both Normal and Heroic modes, and I’m not crazy enough to try pugging Mythic difficulty). On the plus side, it’s the best toon to take on any guild run to help power through the first 13 bosses, as I can swap toons for Garrosh if another guildie can cover me.

The drop rate is apparently greater than it was before the patch (a high estimate for the old drop rate was 20% Flex and 10% normal), but we have no idea how much it has increased by. Even an increase to 75% would be unlikely to give me the shield, as 75%/11 = ~13-14% chance of either of the shields.  Historically in WoW a drop rate of ~23% has been “high” for current difficulty boss loot. Current tier LFR is around 15% drop rates, higher for older content.  It is not impossible that it could go higher (the gaze of the Black Prince buff seemed to make quest drops close to 100%), but I don’t know how much it can go. If they use a bad luck protection mechanic like LFR and coin rolls do, then I like to think I would get at least one more BOA through my main.

The maths might be clearer next week. If people do some 30 man normal runs, and see ten BOAs drop, then its fairly likely that the drop rate is around 33%.  I have had a quick internet search, but I am yet to see anyone post these kinds of follow up statistics. Number crunching with my own charcters gets me this:

I have a Monk (Texalee) I could level to 90 in a few hours … but I don’t think there is time to seriously gear it to be anything other than a floorwalker (my guild’s nickname for any character who spends a lot of time dead in boss fights).

Running six toons through SOO twice per week is not a commitment I could make and keep. That would be a 36 hour time commitment, and I have other things I want to be doing with my life. In four weeks though it’s a lot more reasonable to try and run each character through SOO once each. At best I think I could be involved in three guild supported runs a week, plus maybe one pug at the weekend. In an ideal world, I would not run SOO at all in the last week, taking some time to relax before launch day. Running the low iLevel toons through LFR is likely to be exceedingly painful (I know, I know, I have had a whole year to do it, but LFR is just such a bad gaming experience, and I only put my RDPS characters up for inclusion in the Guild Flex runs).

If I get lucky early on with something, it all becomes much easier. There is a pretty good chance that either Makatu or Texarkana will get the caster stave, at which point they no longer need to run SOO.

Try and get lucky this week. While doing that spend as much spare time as I can getting the undergeared alts up to a point where it won’t be embarrassing to run them through the new normal mode content in a supporting role.  UBRS is a short, fun instance, so its not a big stress to farm that for a while.

…and if it does stop being fun, I’ll stop doing it. I can always get a blacksmith to build me a new weapon at level 100 anyway.

This entry was posted on Thursday, October 16th, 2014 at 9:44 pm and is filed under MMORPGS, World of Warcraft. You can follow any responses to this entry through the RSS 2.0 feed. You can leave a response, or trackback from your own site.