This is a hack of the Settlers of Cattan game, using some of the figures from Cthulhu Wars. Although I see dreams of madness have inspired other designers along similar lines, what I offer here is a small island somewhere in the South Pacific, some fever dream ridden settlers, in a desperate race to complete a great temple and then join their Deep One cousins forever before R’lyeh sinks beneath waves again. 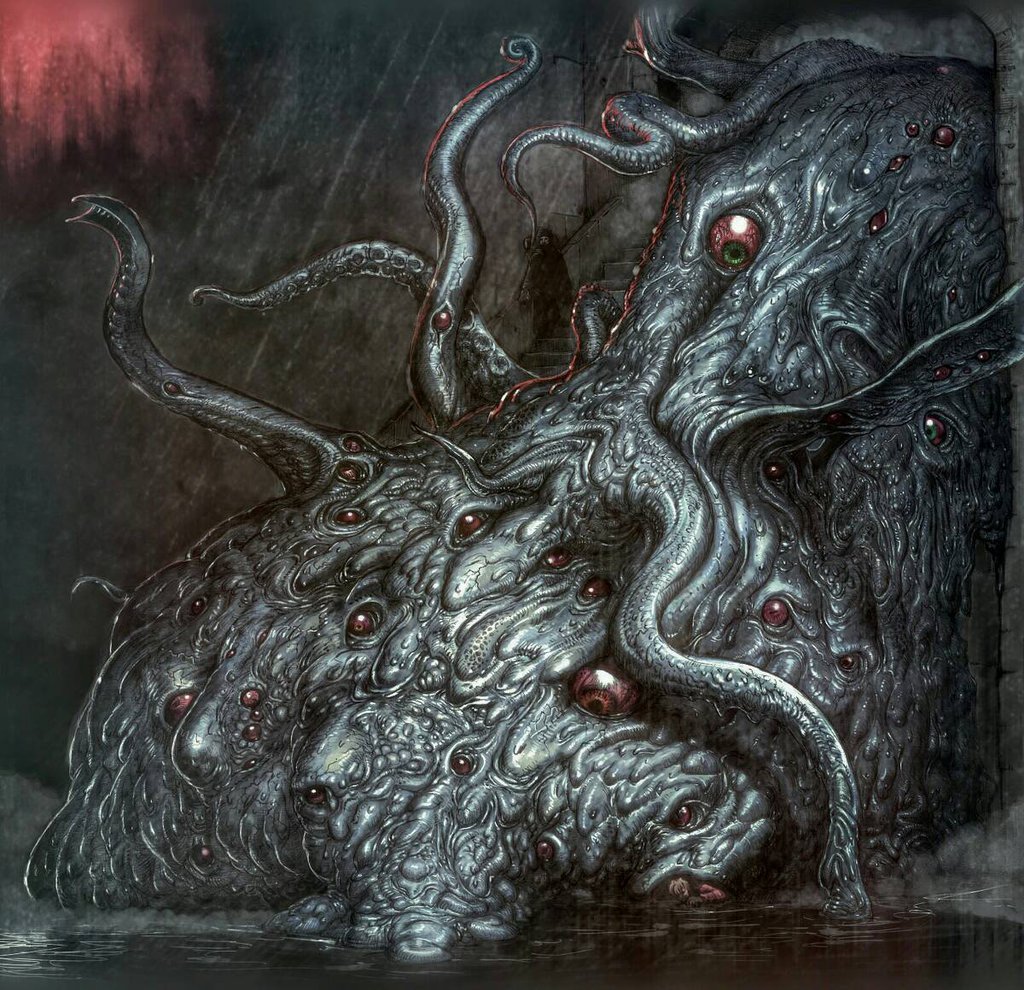 Prepare to play Settlers of Cattan as normal, but grab the Cthulhu figure from your Cthulhu Wars set and replace the Robber pawn with Great Cthulhu. Place Cthulhu beneath the sands that cover the city of R’lyeh (i.e. on the Desert tile). Replace the Knight cards with Cultists from Cthulhu Wars, and grab a High Priest figure if available.

To set the right tone, I suggest playing at night, with candles, while playing A Shoggoth on the Roof.

The Stars are Right

When a player rolls a seven, the stars are right, and Cthulhu wakes. Move Cthulhu to any hex tile on the Cattan map. Do not discard Resource cards. Instead the player who rolled the seven has a number of destruction points equal to the lowest die on their dice roll that turn. For example, if a player rolled a 5 and a 2 for the stars are right, then they have two destruction points.

For each destruction point the player must either:

All tokens removed or downgraded must be adjacent to the tile that Cthulhu now occupies. All destruction points must be used if possible, even if this means a player must remove or downgrade their own game tokens, or must place Cthulhu to revel and slay in gay abandon in a tile that is not the player’s preferred choice. You cannot move Cthulhu to a tile where it inflicts no destruction, unless there are no player tokens left on the map.

If you downgrade a city and the player controlling the city has no village token that can replace it with, then that player must place a village token from another player of their choice, as the inhabitants join another splinter sect of the cult of Great Cthulhu.

The stars are right effect is also triggered if a player must apply the deluge effect due to inability to acquire resource cards (see The Deluge section below).

When you play a cultist card you dream of Great Cthulhu, and then move the Cthulhu figure and apply all of the stars are right effects with the dice roll you made that turn.

Tip: for maximum impact, wait until a turn where you roll a double 4, 5 or 6 before using your cultists.

Note: unlike the bonus for holding the largest Army card in a regular Settlers of Cattan game, holding the High Priest does not grant two bonus VP.

If a player has no village or city tokens on the game map when the stars are right, or they no longer have the ability to get any resource cards from their remaining villages or cities when it is their turn, they must apply the deluge effect:

It is possible no player will reach 10 victory points before the deluge effect sinks R’lyeh below the waves, in which case dread Cthulhu wins. If a player reaches 10 VP first, they complete the great temple, and join the Deep Ones below the waves forever. All the other players should make “glub blub blub” noises as their settlers drown.

This entry was posted on Wednesday, July 12th, 2017 at 5:07 pm and is filed under Board Game, Uncategorized. You can follow any responses to this entry through the RSS 2.0 feed. You can leave a response, or trackback from your own site.