We started with the party split in two groups.

The main group, having just killed a demon, considered the options. Crozane managed to spot, and shoot, renegade sorcerer Mueller through the mists, wounding him in the arm. At which point the cultists retreated into the ziggurat interior. Cue ominous chanting.

The mages managed to make a combination of good stealth and perception checks, so I allowed them to rejoin the main group.

The party followed the cultists into the interior for a confrontation in a room containing pillars and a large pit. While there were a lot of cultists (18+) chanting in the room, only six were an immediate threat to the party. 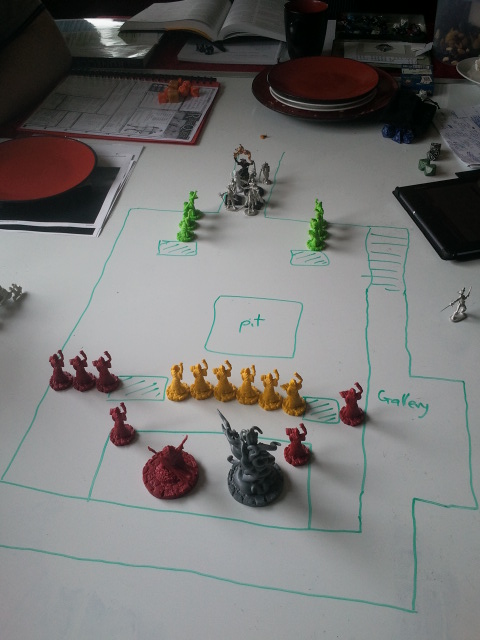 So the warriors engaged the closest cultists, while the mages cast Wrack (fire) and Imprison on different groups of cultists. The Alfandi were reluctant to engage Secundus in his ancient Vordar armour (had to pass Willpower checks to engage).

The cult Priestess cast dismiss on the first Imprison, while Mueller eventually cranked out a Tap (Strength) spell on the PCs and their allies, which gave a few PCs negative damage modifiers. The wrack spell was pretty effective at burning cultists to death, the exception being one cultist who ran on fire to the pit, dropped, rolled, and crawled to the edge of the pit, survived 2-3 arrow/pistol hits, and then finally rolled into the pit as a sacrifice…

While the party rolled several fumbles, none actually took place due to the use of luck points. Same with the critical hits scored by the cultists, luck points were used to force rerolls.

The melee fighting took several rounds to resolve, due to a string a lucky Endurance checks by the cultists (and a spectacular number of rolls that were equal to the skill score). Advancing forwards, the warriors lost formation and Anander and Pyrias were almost overwhelmed – Secundus burned a luck point for an extra action to move over and threaten the cultists. So the cultists did not skewer Pyrias on the ground after tripping and disarming him.

No great shock really when a demon came up out of the pit. Two of Pinshallah’s magic acorns were used to take it out – with a nice critical throw from Pyrias down the demon’s throat. Gobbets of demon flesh and black ichor exploded everywhere. A couple of the cultists ran at this point.

A second Imprison spell locked up the remaining cultists, who were then summarily killed.

That took about three and a half hours to resolve, about 45 minutes per combat round. So that left only 15 minutes to quickly narrate the following:

1. Old Mother Marnash waking up, wounded from the mythic acorns thrown down the pit.
2. Anne-Collette, the Alfandi witch bargaining a concealment/protection spell from the Viridian Book in exchange for the party agreeing to throw the Vordar black glass armour and spirit haunted blade down the demon pit. Loyalty empire passion won out over hate Alfandi.
3. Exiting the sunken mound city, the party found the boat vanishing in the distance (the NPCs who deserted the party earlier raided the treasury, and with a sleeping power waking up in the city, the boat crew were easily persuaded to depart immediately).
4. It took over a week to walk out of the swamp (minor dangers handled with an expenditure of healing and cure disease potions). Anne Collette was installed as an ally in the river clan village, and Anander Rotrant becomes the front of house factor for the business syndicate in Aldarsh.

1. What was the mysterious agent of Enmity up to?
2. What was Mueller really up to – what was he doing here on behalf of the Empire, and how exactly did Skulder betray the Empire (if she did)?
3. What will the wounded sleeping power the party has roused do next?

1. A carved staff of black wood, appears to be useful when evoking demons.
2. The sword of red and gold (Orichalcum), mythically powerful against Father Mornash and Vordar, its a Shortsword that does 2d6 damage (to a maximum of six points).
3. Black Ruby Pendant storing up to 13 MP (rechargeable through blood sacrifice).
4. Jade Wand storing magic skill/10 MP (rechargeable through acts of devotion to the sleeping powers).