The design problem I have been wrestling with this week, is just how much stuff to include in the map game, and how much detail will be required on the game map.

I am still thinking about whether the map game takes place at the same time as the other potential mini-games (imperial politics, trade, technology, and possibly intelligence), or whether the mini-games follow the map game, with the players having the freedom to choose which mini-game they want to engage in.

The latter option requires more time for a full round of player actions and decisions, but probably does not put as much stress on the players. This is because you can pause between the major game phase transitions and give the players time to distribute information. It also gives Control time to tidy up the game while the players are busy elsewhere.

The former option puts more stress on the players (who have to make time during the game to share information with their faction members, and to do diplomacy with other factions), but allows each player role to be more specialised (and in theory means each player has to master a shorter set of rules). This is I think closer to the way that most other Megagames have been run in the past.

In terms of map design, if only a subset of the players are playing full-time at the maps, then they can afford to be a little smaller in physical size, but could also be a bit more rich in information. I’ll come back to this idea towards the end of this post. There is a third option as well, which is to run the map game full-time, but to only occasionally run the mini-games, rather than having the mini-games occur every turn.

I am not sure if there is a right answer here.

First, I have spent some time getting to grips with Profantasy’s Cosmographer expansion for their Campaign Cartographer mapping software. One of the things I did was to grab their example of a galactic map, and strip off its political borders and labels.

While this looks nice, the physical nature of the map tables means that building a game map for 40 odd players off something like this is hard. A big circle is simply too difficult for players to reach across. Plus the most recent thoughts on what the Milky Way looks like are a bit more complicated. The presence of a big black hole in the centre of the galaxy (Sagittarius A) means that its a bit implausible as a location for an Imperial capital.

The Milky Way Galaxy Map website, as the name suggests, has been able to provide me with a lot of information about the observable portion of the Milky Way galaxy. On the whole it supports the four spiral arm take on the Galaxy, but also provides a bit more discussion in talking about the spurs off the main arms and some bridges that connect them. So this atomic hydrogen model map was very helpful in taking my ideas to the next level. The far side of the galaxy probably has a similar level of interesting detail, but we simply can’t observe it accurately through the plane of the galaxy.

So what I have done here is outline five sections of the map to focus on. Each of the red rectangles will be developed into its own map. So unlike The Colossus of Atlantis, each table will have a different geography and character. To simplify gameplay, the off-map parts of the galaxy will be sparsely populated backwaters that play no major part in the game.

The most common term for mapping large sections of the galaxy is quadrant (typically either centered on Earth, or the centre of the Galaxy). The English language is sufficiently flexible to allow more than four quadrants (the word has the same sense as a city quarter). For a smaller region of space, I think “sector” is the term most often used in fiction. So the levels of gameplay are:

First, lets repeat this image from a previous post, covering what the sector/hyperlane/system part of a quadrant map might look like. I think in future versions I will try using some of the sheet effects in Cosmographer to make the sectors more circular in shape. 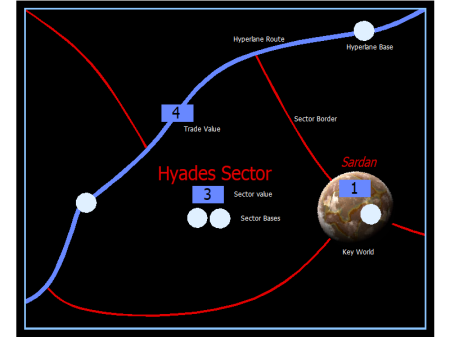 So what a player could see on the game map is:

Which is getting to be a bit much I think. Especially if you have to scan 20 odd areas on the game map. Its a lot of rich, complex information, which makes the game fun to play if you have a fair degree of system mastery, but could be overwhelming in a one-off megagame. The COIN system that influenced my design thoughts is optimised for around four players, rather than forty players. I am just a bit worried that its one token too many, and my design goal is that I want players to be able to resolve three rounds of action at the map table every 20 minutes (a lot like Aquila Rift).

Here is what I think I can do to keep most of what I want in the game system, while making it easier for the players:

So, if you have read this far, what would be the first thing you would cut to make the game simpler?

This entry was posted on Friday, September 29th, 2017 at 6:31 pm and is filed under Decline and Fall, Grand Strategy, Megagame. You can follow any responses to this entry through the RSS 2.0 feed. You can leave a response, or trackback from your own site.

2 Responses to Mapping the Galaxy