Managed to get a playtest done for my boardgame design on Friday night. After a last minute cancellation due to health, we had three players, and completed the game in four and a half hours.

Some things worked very well, especially the Dreadnought construction mechanic and the way it interacted with the Decline & Fall of the Galactic Empire. Combat mostly worked, although there was an issue with “pure victory” not giving enough of a benefit to the winner. The game flow was about what I expected, early expansion, combat when the empty space for easy expansion ran out, a pause, then further fighting, a pause for a round of monument building, and then a quick descent into the abyss of the endgame. 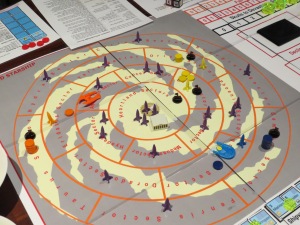 The Blame/Decadence mechanic did not work well. Partly due to an early Rotten to the Core event that removed Blame from Corruption in the Atomic Power collection phase, and partly due to there not being enough sources of Blame. So next playtest I will add more options for acquiring and manipulating blame.

The players mainly stayed with 10-15 Glory points of each other, which seems to justify a high glory score model, and they reached Glory scores of 50-60 by the time the End Game was triggered.

The Fall Track was at 12 after the second turn, 10 after the third turn, 6 after the fourth turn, and the endgame was triggered in the 5th turn.  So it declined at about the expected rate.  Atomic Power inflation did occur, and this makes the later turns slower, so I may think of reasons to have big power sinks to speed play a little. The playtest did show that becoming powerless was a bad move, running out of power before the other players made you quite vulnerable to raids on your territory. 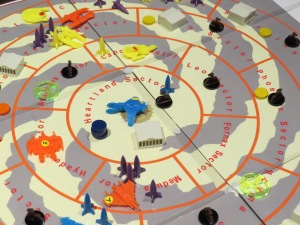 The endgame was a three way civil war, largely fought between a coalition of Blue and Yellow versus Orange (which included the Purple Imperial Battleships). Orange fought quite well, but really couldn’t outlast the determined attrition of two players. At the end Blue had two Dreadnoughts left and Yellow had three Pirates. In a four player game, it would have been much riskier for two players to go all out against the Last Emperor, as the fourth player could sit on the sidelines.

On the whole, the design feels very promising. I’ll be making some tweaks and trying to get another playtest done in the next few weeks.

This entry was posted on Sunday, October 19th, 2014 at 6:03 pm and is filed under Board Game. You can follow any responses to this entry through the RSS 2.0 feed. You can leave a response, or trackback from your own site.