Progression in World of Tanks gets a lot slower as you buy more tanks, as you spread your playtime across multiple vehicles. As the tiers go up, the amount of XP also greatly increases to the point where several hundred battles are required to unlock the next design.  Even though I am only concentrating on one tech tree (Russia) the grind through Tiers VIII and IX has become very slow.  Its also painful when a tech tree branches into multiple tanks, and you have to keep playing until both are researched.  I am still enjoying play of the H-35, UE-57, KV-1, KV-2 and KV-5 (my favourite tank for ramming), and playing one game on each of those is usually an hour of good times.

This is the tier IX Russian Tank Destroyer (TD).  Sadly after 100 battles I am only averaging a 47% win ratio, and looking at all my tier IX tanks the victory rations are all sub-50%.  So while on paper its a decent vehicle, its often running into Tier X vehicles with players who know a TD’s weaknesses. I have a lot of days where I wish I was back in the ISU-152.  The 704 is fairly educational around why turretless tanks largely vanish from the OB post-WWII, anything that is fast and gets close will flank me, track me, and laugh at me.  One of the biggest issues I run into in high tier public matches, is a refusal to scout.  If no one spots for the team, I’m useless.  If the enemy team has a competent scout, once I’m spotted my survival time is about 5-10 seconds – unless the enemy shells bounce off my gun plate the TDs HP get stripped fast. In this Pearl River battle I was the brave one to be first around the corner that an M40/41 SPG was hiding behind (with a loaded round), and got the last kill needed for the Expert USA badge.

This is the tier VIII Russian SPG Artillery, and like most high tier vehicles, its not a lot of fun to play.  While it can fire about every 45 seconds, and it does a lot of damage when it hits, its a big if around the hitting.  I can fire 12 shells in a long battle and miss every time.  I’ll have to wait for the Tier X SPG before I get significant improvement in the accuracy.  Even more so than the TD the SPG is utterly reliant on a team that can spot, block scouts, and not manage to lose an entire flank in the first three minutes.  Its not without reason that the player most likely to bitch about “noob teams” is in a SPG along the back line. I’m not sure how my team won this match, because they let the enemy scouts crawl all over the cap, which made it a short match for me. 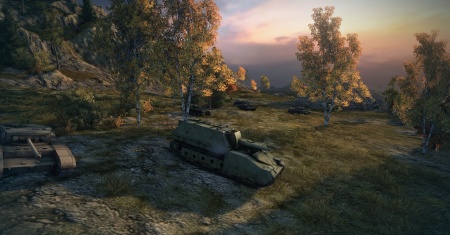 This is the tier IX tank in one of the Russian heavy tank trees, and progression leads to the IS-4, which is not as popular a Tier-X tank as the IS-7.  Once fully researched, its a lot of fun, reasonably fast on the flat (but not uphill) it has a decent gun and armour.  Like a lot of Russian tanks, its good for fast moving brawls.  Of all the tier VIII+ tanks I am progressing, its the most fun.  I did well in this Himmelsdorf map, climbing the hill, flanking the enemy behind the Castle, and then hunting a medium down in the south town, before the enemy arty killed me coming around a corner (the T-44 right behind me then hunted the arty down after a long game of at and mouse on the train tracks). 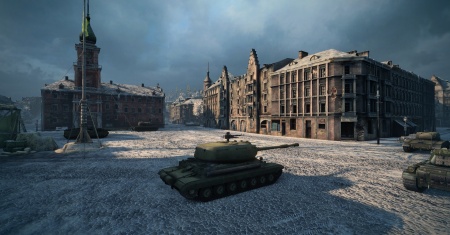 This Tier-VIII Tank Destroyer is a piece of shit.  While it is fast and can redeploy quickly, both its armour and gun are crap.  The crap gun is really noticeable when you draw Tier X opponents. I only play this if I am feeling masochistic, as if I am going to have to grind TD pain, I’d rather do it on the 704 and get a bit closer to the Object 268 Tier X TD.  Just to remind myself what it was like I took it out for a spin.  Got Mines map and 350 ms latency, which is awful, but as it was a Tier VI-VIII battle I was able to penetrate and do a bit of damage.  A chunk of my XP came from spotting damage when I did a favour for the other TDs on my team by sprinting over to the shadow of a ridge line for proximity spotting.  One hit from an IS took away half my HP which just reinforced its vulnerability.

This is a Russian Tier VIII medium tank … and the research grind is long. As well as tracks and turret, there are three engines and five guns to research.  The default Tier VII gun is underwhelming for a tank that will face Tier X monsters on the field.  I’m suffering through progression so that one day I can wolfpack at tier X.  In play its a hybrid, not fast enough to be a light, not grunty enough to be a heavy.  While a medium should be trying to flank and disrupt, the basic T-44 is just too slow and too puny to be scary. It pains me to say this, but I just keep playing and hoping for a decent team to carry me to the double XP win of the day, then I swap the crew to the Matilda Tier V premium for some crew training.  On the outing pictured below, sadly the latency hit me and I drove into the water and drowned.

I have done about 20 Clan War battles with PANZR (Panzac Raiders) and it has been a lot of fun.  The IS-7 is much more fun in a team unit than in solo play.  The new rules for locking tanks out of Clan Wars, however, means I will only get to play Clanwars about three times every two weeks (if you click on the picture below you should get a clear view of the hour countdown in the tank strip at the bottom of the image).  As much as the company may talk about strategy, it looks pretty clear to me that this is intended as huge silver sink (about 6,000,000 a pop, or a couple of months grinding on a premium account) as people buy additional tier Xs to support their clan.  It is a lot of work, 15 minutes prep for each battle, and many battles are uneven fights, no shows, or ten minute sitzkriegs. Still, its a good feeling to have a competent company commander, be given clear orders, and just do my best to execute them.  In my last battle I sacrificed my tank by turning 90 degrees away from the enemy, allowing the rest of my team to take cover behind me as they converted the cap for the win. 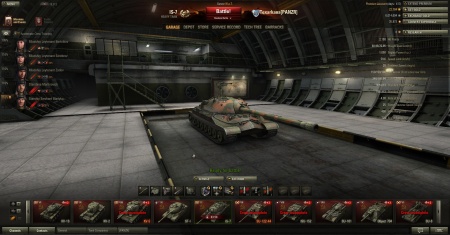 Every patch another new map.  There are new maps that I have played once or twice since the last patch, which is really not enough to have a good chance of learning the map for different types of tank.  So its nice to see new skins of old maps (with snow or fire added).

This entry was posted on Tuesday, March 18th, 2014 at 9:53 pm and is filed under World of Tanks. You can follow any responses to this entry through the RSS 2.0 feed. You can leave a response, or trackback from your own site.