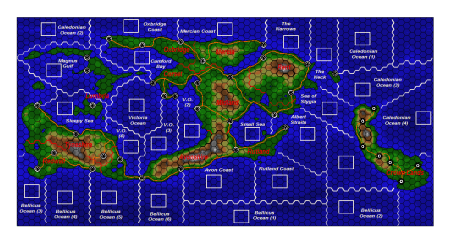 Some more work done on the map today: borders and cities added, railways and ocean zones, nations have been named with suitably English themed names.  All nations except Midland have three cities, Midland has four.  All nations have some kind of rail network, except Lumbria. Midland is the only nation with a good rail network, and there are definitely places that are barren of railways.  Before the game starts player teams will have the opportunity to build some more railways and cities (or to increase their standing armies and fleets).

One lesson I have learned for rapidly adjudicating combats for control of zones is to avoid having stacks of a dozen or three dozen units. It takes a long time to count them.  So one big step for navies in Pax Vicky is that each nation will have a small number of Fleet units, perhaps 3-6 each depending on pre-war options.  Each Fleet will have a strength of 6-9, representing various squadrons of battleships and support ships (and strength will depend in part on pre-war options).

So on the Pax Vicky map I have around 27 sea zones, each with a name and a control box.  This is less than the number of fleets the nations will have.  While some sea zones will fall naturally into one player’s sphere of influence, others will be hotly contested.  Midland has one of the worst naval positions, having three different areas of naval operations, and no easy way to transfer forces between them.  All nations are within 2-3 sea zones of the Crown Lands, the uncontrolled territory at the start of the game.  Any nation or coalition of nations able to control the Crown Lands and maintain a convoy route there will gain a considerable economic boost in the game.

Some cities are located on the boundary lines of sea zones, this is deliberate and will allow fleets based there to project forces in either sea zone easily (or at least get repairs more effectively).

As well as the main battle fleets players will have some supporting naval units:

There are two main approaches to steam age naval warfare with bloody big battleships: seek decisive battle, or avoid decisive battle and raid the enemy where they are weak.  You generally try and seek decisive battle when you have a superior battle fleet  or if you are pressed by circumstances to gamble.  Mahan’s advice here is to “never divide the fleet” (i.e. if you split your fleet up and send it in different directions, its likely to be defeated in detail).  When you are weaker, a sound strategy is to hide your fleets in safe habours, emerging only when the situation changes.  Meanwhile, smaller vessels are sent off to raid the enemy shipping lanes, sinking ships, disrupting commerce, driving up insurance rates, and so forth.  In the 20th century this was largely done with submarines, although to keep things simple for Pax Vicky I am assuming raiders to be light cruisers, with the endurance to sail a long way away from home bases.

The strategic objective of naval combat is control of the seas.  In Pax Vicky there is a bonus to be gained from being able to trade, and a massive penalty for being blockaded (having no sea zone that you control adjacent to a friendly controlled port).

Naval combat is optional.  The oceans are big and easy to hide in.  If a player does want to fight they can choose to either raid, or seek decisive battle, but not both in the same turn in the same sea zone.  Naval forces can only fight once per turn.  If you control a sea zone, with a fleet, and no other fleets are present, you can automatically assert control and force all Cruisers, HQs, and Merships controlled by other players to leave that zone.

Draw two cards for a Fleet that is stronger than an enemy Fleet.  Draw one card for Fleets of equal or weaker strength.  Draw a bonus card for an Ambush.  Note that there is a strong advantage in favour of the stronger fleet which is difficult to reverse except through luck or attrition over time.

A card “hits” and does damage if the number on it is equal or less than Fleet strength.  Otherwise the card “misses” and does no damage.  A small number of cards have symbols for critical hits and inflict two damage if successful, otherwise damage is one per card.

Each hit on a Fleet reduces its strength by one.  Mark this by placing a counter on the Fleet.  Any Fleet with five or more damage counters is no longer capable of remaining at sea, and retreats to the closest controlled port.  Damage counters persist until repaired in a logistics phase.

A Fleet loses the battle if it is forced to retreat from five points of damage accumulation. If a Fleet misses with all cards when its opponent hits with at least one card, it also loses.

If both Fleets score at least one hit, fight another round of combat.  Repeat as necessary until a winner is determined or both fleets are forced to retreat.

Note that five points of damage will take a long time to repair, possibly as many as three naval logistic turns.

This entry was posted on Wednesday, February 6th, 2013 at 6:31 pm and is filed under Grand Strategy. You can follow any responses to this entry through the RSS 2.0 feed. You can leave a response, or trackback from your own site.