Grim and Gritty, or Glam and Sticky? 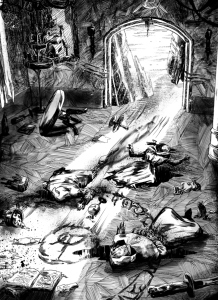 In which I will eventually consider my own play preferences, but first…

I have been doing a lot of reading on roleplaying game design over the last few weeks.  So much so that I suddenly started dreaming in GURPS mechanics last week. Which is odd, as I have never owned a copy of the GURPS rules, just a few of the setting supplements.

My reading started with me thinking about cooperative magic mechanics, magic mechanics in roleplaying games in general, tropes entries on magic, and some Wikipedia research on shadows and weaving.  I also listened to some podcasts at Narrative Control. Chatting with friends, I got feedback that my pitch was more of a Gotterdamerung/final days pitch than a real post-apocalyptic pitch, which I thought was valid.  This led to me thinking a bit about noir settings – and the very next day Bundle of Holding decided to have a noir themed release.  I am still working through that pile of information (and the rulebook for Ars Magicka 5th Edition from another Bundle of Holding offer a few weeks back), but I think a noir influenced setting might require multiple flying cities (so you can have a Casablanca in the middle of it all).

I can go back and forth on the setting. While its important, trying to build it without a better grasp on system is likely to be a waste of time. Figuring out the best system for the setting depends on figuring out exactly what I want the characters to be doing in the game system and what I want the players to be doing around the game table.  So I need to do some research to try and figure out if an existing game system already does what I want, or if I need to build my own system.

Many game systems are silent on the issue of character cooperation to resolve contests in the game. Some games allow one character to assist another, but few of the mechanics I looked at are built explicitly around a group of players all making decisions about the contest outcome. Here are three that I found:

Dungeons & Dragons 5th Edition: everyone makes a roll, if half the characters succeed, the group succeeds. Dull.

Runequest 6th Edition: the extended skill check system can be used for group tasks. The GM sets a difficulty (suggested base is 100), and the characters do skill checks, +25 for a success, +50 for a critical success and -25 for a fumble. Not quite as dull as D&D, but close.

Blades in the Dark: Characters take turns at being “on point” for an operation (which is based on teamwork). One of their options is to lead a group action: all players roll six sided dice, the best roll is used, but the leader takes one “stress” for each roll of 1-3. Players in “backup” roles can also influence this, e.g. by taking stress to roll a bonus die. Extended tasks are handled with progress clocks, which reminded me of the damage clocks in Apocalypse World. Overall I found this system was exciting my imagination, and I plan to run a Blades in the Dark game at Kapcon in 2016.

Starting with Runequest, the sorcery system is close to what I want, but many of the spells are either lacking in obvious utility for player characters, or are too powerful for player characters. In play, I am not sure there is enough width to the spell list to make a combination of magic form 5-6 characters worthwhile.  The current edition also makes magic very all-or-nothing, either a spell overcomes the defences, or it completely fails, and this is a paper-scissors-rock subgame game.

I am not done reading Ars Magicka yet, but its rich and detailed magic system is primarily focused on the individual mage. While the troupe/covenant playstyle is interesting, its not what I am looking for.

D&D/F20 suffers from my dislike of Vancian magic. Too weak at low levels, a campaign killer at high levels.  If I have to rebuild the entire magic system, I might as well look elsewhere.

Note: there are a lot of roleplaying game systems out there that I have not played, or are unfamiliar with. I would be happy to hear suggestions of game systems I should take a closer look at. Information in forum posts makes me think I should take a look at FATE, and in particular The Dresden Files.  I only know the Mage: the whatever games in brief summary.  Heroquest and Riddle of Steel fall in the :too damn complicated” box for me.

Not satisfied with my search for illumination, I have been thinking about my literary influences, and also doing some research on roleplaying game design.

The Power 19 are like an extension of the Big 3, and most of the 19 feed off/interact with them, so I will just repeat the Big 3 here:

Hard questions that are worth answering. I don’t think I have solid answers yet but some initial bullet points are:

Another part of my research was trying to figure out how dice pool mechanics work. I was sleeping under rock when these came on the scene, and I was intimidated by the wall of d6s required to fire an AK-47 in Shadowrun.  I think I get the concept now, and while an “exploding die” can be fun for criticals/fumbles, I still think my gut feeling is right that throwing large numbers of dice to determine contest outcomes has a big downside in terms of the mental energy required to keep processing the maths.  Star Wars: Edge of Empire has a dice system I would like to know more about, but the game is petrified in dead tree format, so it is going to be a while yet before I get to read it.

RPG Design Patterns was a good read. I think the best insight it gave me was on “Conflicted Gauges”, where is where a mechanic in the game is situationally good or bad.  For example, in Call of Cthulhu a high Mythos Lore skill is handy when trying to remember facts about eldritch monsters, but a disadvantage when trying to make Sanity checks.  There was a lot more in there, but this is going to be a long post already.

The RPG Design Handbook gave me some other questions to think about:

I think its worth listing some of my literary influences at this point:

I have not been influenced by Robert Jordan’s Wheel of Time series, even though I worked back to it when searching for “magic + weaving” on Google.

My tabletop roleplaying gaming started in the 1980s and was firmly rooted in the first generation of games: Dungeons & Dragons, Runequest, Call of Cthulhu, and Traveller. Most of the campaigns I have played in or game mastered, have been in those systems, or a D20 version (like Fading Suns).  Kapcon has been good for being exposed to indie games, but prior to the Bundle of Holding, it was rare for me to look at other game systems on a regular basis.

Its interesting to reflect on my play preferences and how they differ when I am a player or a game master.

While there are a lot of grim and gritty roleplaying games out there, there are not a lot of glam and sticky games. These reflects the wargaming roots and the mania for combat simulation. Still, maybe someone will make a game some day about playing 1970s rock stars and their groupies.

I do not have a solid idea yet on how to articulate these ideas as a mechanical expression.  Rolling some dice probably, but if I want something closer to the stories of literature/cinema, then I need a way of divorcing myself from the simulationist mania.  I would like the game mechanics to incorporate these ideas:

I am doodling some diagrams, trying to see if I can build some conflicted gauges around 3-5 magic resources.  For example, having a strong talent in Wild Magic could help you create new magic, but might make all your spells harder to control.  Other potential axis are destructive/creative, permanent/non-permanent, clarity/confusion. One thing I want to avoid, is writing up 666 different spells. Much easier to have just a small number of useful spells. Some important considerations for magic in the setting itself:

I did some quick market research this week. Tabletop roleplaying games make up $15m of the $750m hobby gaming market. Boardgames have a greater share of the market at $75m. Most of the market is taken up by miniatures ($125m) and card games ($500m+).

The bulk of the tabletop game market is dominated by the Dungeons & Dragons and Pathfinder systems.  Outside of the F20 market are a handful of universal game systems, such as GURPS, or more focused systems, such as World of Darkness that have large followings.

I think if you want to make some money in publishing a new game setting, you have to think really hard about not using some flavour of F20.  If you want to publish a new game system, I think you need to be focused in your efforts. Write two pages, not twenty pages, write twenty pages, not 200 pages.  Having looked through a number of the universal setting free game engines, I would be unconvinced that the world needs another way to roll dice on the table.

Finally, a shout out for my friends at the Chestnut Lodge Wargames Group in London, who have migrated their old club newsletter into the blogging age. Military Muddling may be of interest to people who are keen on historical game design and megagames.

The artwork in this post was taken from the art pack for The Silent Legion.